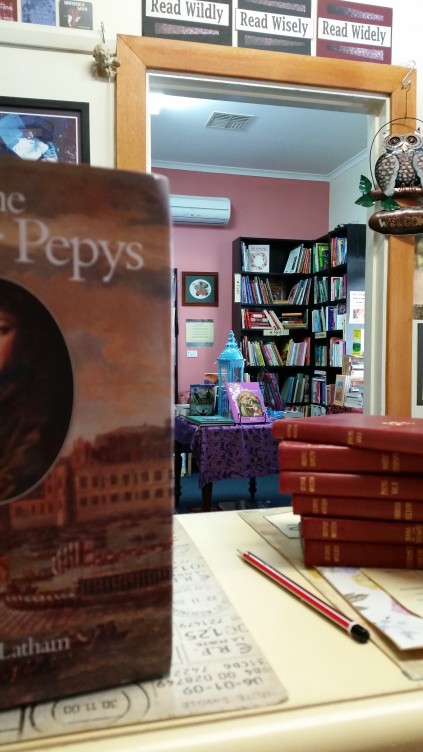 This morning I was told that the weather is filthy and my shop would be warmer if I fixed the faulty closer on my shop door.

And it is filthy outside. Yesterday somebody’s green bin went down the road broadside and there was a scene when a group of travellers found the bakery closed. They stood outside my shop and said that they ‘couldn’t believe it…’

Then they all left for Goolwa except for the Winnebago driver who stayed back, phoning somebody to tell them that he couldn’t believe it.

Arthur found a copy of The Spanish Bawd (Rojas) and was delighted because he only had a copy in Spanish at home. I noticed he had both pockets stuffed with paperbacks that he had bought before and was still reading. One of them was called Ferdinand and Isabella and it was packed with bookmarks.

He was going now to the bakery to read and I had to tell him that the bakery was closed for renovations. He said that he couldn’t believe it and went out looking tragic.

A young man, who was on the hunt for naval stories predicted that it wouldn’t stop raining until summer. But I am hunting through the counter for a pencil and I am distracted by Samuel Pepys and not concerned about the weather today.

Later, Jai told me a very long story of how the university threw him out of his course. He told me that they, the government and everybody including myself needed to listen to him properly and stop throwing him out of everywhere. He reminded me that I was unkind and that he knew I would throw him out of the shop as I did last time. He said that I was mean to him because he never bought any books and also I had not bought his own book even though it did not cost very much. He said triumphantly that the shop is stupid.

I wondered if he would like a cup of coffee at the bakery (which is closed) but luckily he said he did not need stimulants. Then he left furiously, trying to bang the door but it wouldn’t because the closer is faulty.

I am wondering if I have a proper job when Margaret drops in to lend me another music recording. It is Kathleen Ferrier and she says that I will like this. She says it is good against the winter.

Outside somebody drops a whole bag of fruit onto the wet pavement and I see them leaned against their car in despair.

I look to Samuel Pepys and I read that he often had to lie a bed for a long time. And that in June, 1665, he became terribly sad and was forced to buy some roll tobacco to chaw – which took away his apprehension and the bad smell of himself.

A young reader tells me that Tolkien’s Lord of the Rings is so textured that it is almost real. I am immensely cheered up. When I am packing up for the day I think that Samuel Pepys is so real that he must have been real.