Then she said, ‘I’d stay longer, but I’ve two impatient men out there.’ She wagged her head from side to side and raised her eyes to the roof. She remained looking thoughtfully upward, as though seeing some solution up there.

Then she looked back into the biographies. There was a tap on the window and an urgent face appeared.

She opened the door an inch and stared out, and they stared back. She said, ‘I just told her in there that I’ve got two impatient men out here.’

They jumped back in alarm. One said, ‘Well that’s not true is it. We just want a cup of tea. You go back in there to your books and fancies. Can’t she Frank! Why can’t she do that!

But Frank was not helpful. He had turned away. A cup of tea! He disappeared from view.

She joined them outside, sighing, suffering, and I heard her say, ‘Well, my goodness”, as they continued down the street.

There’s a dump truck, a trailer, a digger, a dozer, and a roller. Each toy has a precise story, a precise history, and a name.

The stories are lengthy and I don’t hear all of them. But they are complex and detailed and make me realise how much I don’t know about what a two year old is thinking.

The dump truck has to bake biscuits, with sugar. There’s not enough sugar. The trailer is making carrots. The trollers are friends. The bulldozer has been removed from the sandpit along with a feather because they aren’t allowed to be in it.

Max talks into an orange tile and arranges for petrol from Foodland. He clicks a long code of instructions and says “cheese”. He says, “Look at this”, and shows the tile to each of the trucks.

The dump truck is sent to kindy.

A bigger truck with a crane and hook is introduced. This is for bringing in the “fish tank” and is driven by a purple and orange felt doll who has leaves (for wings) and who lives in the tyre shop. The truck also carries bowls of food and trees.

At lunch time, over enormous ham and cheese sandwiches, Max shows me how to mend a broken sandwich and how watermelon is really cold. He says that our cat is always watching us. 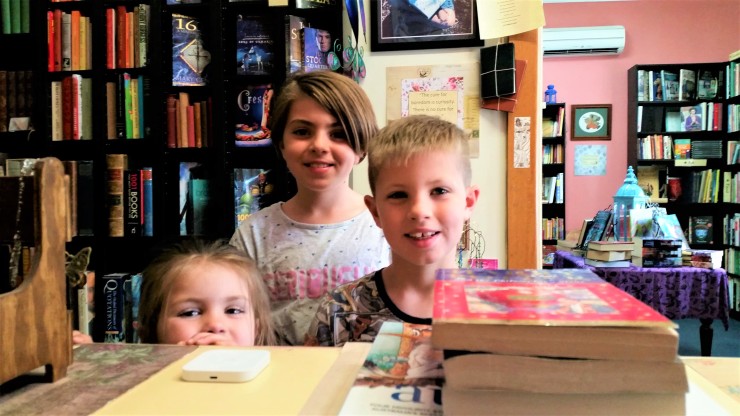 Three children and their parents. They carry the books around, reading as they walk, reading out loud, spotting something else, kneeling down to see. Wondering and thinking, do we need it, have we got it? We do. We don’t.

Three Harry Potters make it to the front. And then a book on sharks that they asked for and stood over, pointing and discussing, and which can’t be left behind. Very good.

Dad comes back, he just ducked out to the 12 Volt Shop (he said), and now has a good look at the selections. Very good.

Then they all muddle out, bumping and swaying, which is how you walk when you read at the same time. (Very good). 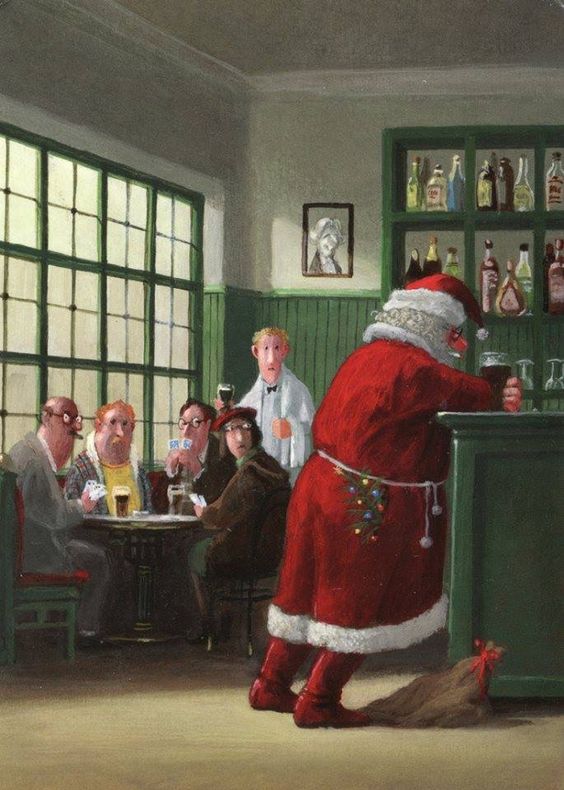 “Stories of imagination tend to upset those without one.”

I watched this reader come into the bookshop and sigh over the books, while at the same time maintain contact with friends outside the window.

There was something on the window table that was enthralling. She bent to read. She held her phone to her ear, whispering the plot to a friend perhaps. What was the book? I couldn’t see.

Her friends were clustered outside the window. They leaned into the window and made significant expressions. She stared into their faces and spoke into her phone. She stretched her face around the agony of the news.

The book, a paperback. She held it open with one elbow and signaled something diabolical though the window. I drifted close by. It was Dangerous Creatures.

There was a desperate exchange of information by phone and face.

The reader raised herself on her toes for emphasis. The watchers drew back in respect. Maybe someone in the book died. Should I offer support?

The reader knelt down to read further, calm and out of view. The watchers fogged the window in alarm. It seemed to me that the entire day paused.

Finally she rose. Replaced the book and fled the shop, one hand clasped over her mouth, keeping the the angst organised. She allowed me a brief glance. Outside the door she raised both arms and was received by fellow readers. I saw their young and tortured hands reach for her as she closed the door.

Artwork, Even the Tiger Stopped to Listen to her Tale, by Mary Alayne Thomas

Max and Noah took a picture, but the camera wouldn’t work. They took seventeen photos because it is impossible to lift a thumb off the camera icon once it is down.

Usually there is another thumb over the camera lens. All they capture is thumb. Still they admire it, ‘Look at this.’

They can’t get their own heads in the frame both at once. When they manage it, they take seventeen photos of thumb. Then they examine each one as if choosing a prize family portrait. And they found one!

Yesterday was hot, and the ducks on the road into Strathalbyn sat too close to the road and refused to move. People came into the shop and said, ‘God, it’s hot!’

Today is cold, rain in the morning and people coming in and saying, ‘My God, this is strange.’

One man said that a second ago, it was summer.

His girlfriend said that she doubted it, and would he pay for her books.

He said, ‘How am I supposed to do that?’ But he paid for the books and looked pleased.

She said, ‘I love this weirdy weather, you can read in it.’

He said, ‘I know, but I might be going to start,’ and he looked around for a book to start with.

She said, ‘I don’t believe you’, and looked pleased with him.

A group of people came in off the train. There were about fourteen of them, all friends and all speaking English and what I thought was German, but turned out to be Dutch.

They loved the books. They moved from room to room. They knelt to read the children’s books to each other, in Dutch and in English, a working counterpoint that swam in bright notes all over the shop.

The husbands were shouted at. They were too slow. One man wanted a certain picture book with a kangaroo on the front. They stood in a circle around the book, tapping the pictures, talking about the kangaroos and the fairy penguins. Then he couldn’t find his wallet, or his phone. He was shouted at again. The words were beautiful, effective, unfamiliar. The wives waved bags in the air and made shushing sounds. They made sounds of impatience. They made sounds of derision. Fluent cascades of words and argument clattered about everywhere, Patricia Cornwell, Agatha Christie, Asterix were all examined. A John Grisham book was thumped back into the shelf.

No, no, no, no! A husband offered a possibility. But, no!

Two husbands went outside and stood with their shoulders raised against the shop. A wife tapped the glass, and they swayed but did not turn around. They looked across the road.

There were so many conversations. So many books. So many opinions. Somebody brought some books to the counter and said, ‘We’re from Holland!’

Then it was time to go. The husbands were shouted for, ‘The train, the train.’

When the last person had gone, it was quiet. 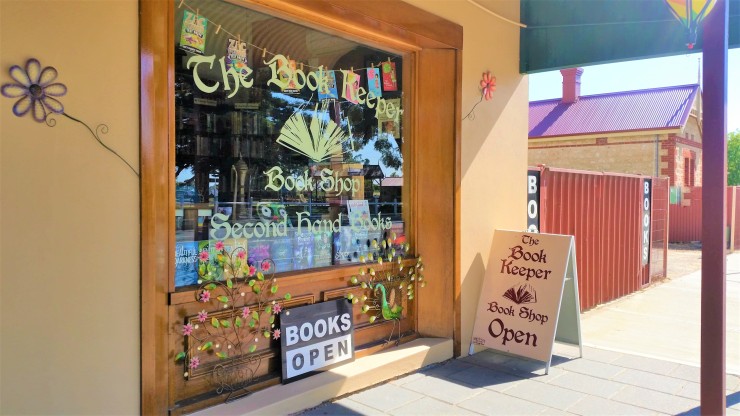 Just a note to thank everyone around me who sends people my way. I can’t afford to advertise, so word of mouth it is.

Small businesses don’t survive so well anywhere these days – but everyone who drops in on a visit here, tells me it’s precisely because of the small businesses in Strathalbyn that they come.

And of course books are supposed to be “on the way out”. But books are always on the way out, or at least on the way somewhere (in people’s arms). And young writers everywhere are writing madly. And reading.

So, it’s worth staying on in a micro business that means no profit but endless joy. Not that hard to keep going!

And thank you to everyone who reads my stories. At first I was just writing them for myself – because I didn’t want to forget the people who came to the shop. But now, when there is something important to capture in writing, I am excited to tell everyone – look at this!!

Readers, and what they do – so astonishing to me. I am glad I am not alone.