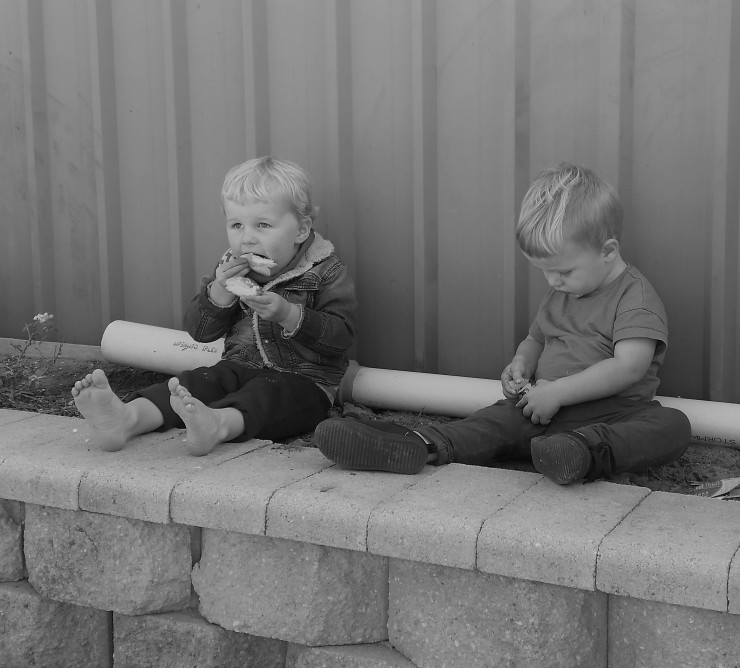 There is a family gathering at the end of summer. The oldest of this bowlful, the great grandparents, look benignly down across everyone. The youngest on the playground, the two year olds,  look up in astonishment at everyone.
Noah and Max aim their cousinly flights through two things only. Matchbox cars and slices of bun. There is a tiny digger of monumental value. This is because it is a digger, a tiny yellow plastic digger that they both want. The digger. They can both say digger. This word, for Max and Noah, lives in the cave of their mouths, already there, a solid, tasteful item. Digger. And there is the added delicious conflict that there is only one toy and two of them. This conflict provides enough material to enrich the entire afternoon.
They zone from table to garden and back again. They have stolen a thousand pieces of doughnut and bun. Great Grandma encourages the thefts, she looks on with approval. They are able to carry an entire theft in one fist. Mashed in with the cakes are the digger, the bulldozer and the cement mixer. The cement mixer is full of doughnut.
They have found a patch of garden that contains loose dirt; wealth equal to gold, diamonds or cordial.
Here they sit serving their own version of refreshment by the fistfuls until suddenly they both stare at the digger. There is a lurch and a chase, but they are only two years old and the purpose of the conflict becomes lost in the joy of muscle, movement and a snail.
(Reminders of toilet, safety and manners flick at their ankles and are ignored, lost).
There is another chase that ends suddenly because nobody has the digger now, it is lost. They stand perplexed. Suddenly they forget the toy and there is yet another race, wobbly, wild and scribbling, but the nappies weigh heavily, ballast is out of balance and there is a fall. There is exhaustion and despair and then finally, tears. It is time to go home.