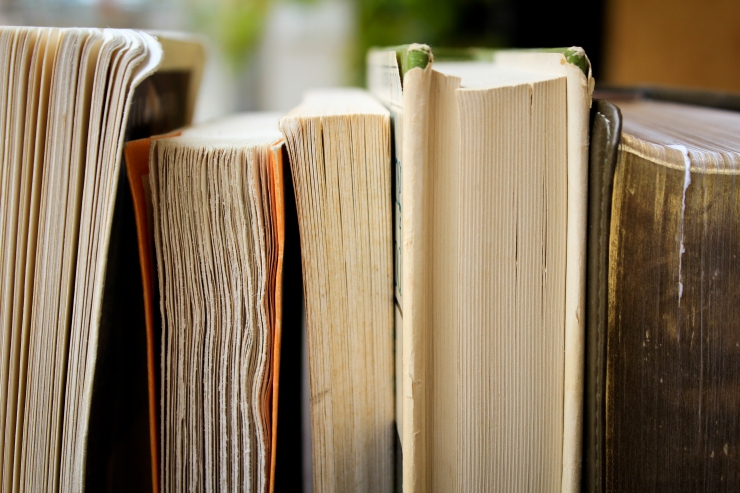 A child leaned into and over the window display. She froze into position, arms outstretched. She told her mother she was being part of the book display so that people would stop and look in. Her mother asked her if she was being sensible.

There are two books here by Australian author Eleanor Spence: Me and Jeshua and Miranda Going Home. They are historical novels for young readers, novels of first century Palestine and the friendship of two children with Jeshua, a carpenter’s son. They are memorable books and I still have my own copies. A mother is here and her children are on strict reading lists. They must not be exposed to magic, make believe or historical inaccuracies. She asked me: are these books disturbing and will they upset my child’s head?

A very young reader brought Animal Farm to the counter. I said: are you studying this text at school. She said: no, and then quickly left. I felt that I had been intrusive. Who can explain why they want to read George Orwell.

There is a family here that visit often. They brought their small bikes inside for safety although they left the sleeping baby outside, parked beside the window. The youngest boy indicated the baby and explained the situation: This is my Uncle Lisa’s baby and her was born just this morning. (She is 10 weeks old, said the mother). Then the small boy mentioned a library card…he means a bookmark, explained the brother kindly and he has had his hair cut today, this morning. The smaller boy inclined his head so I could see in detail the bristling new haircut.

I read another story by Djuna Barnes and it is disturbing.

Peggy who is indomitable, who is 84, came in for Daniel Silva. She is only reading thrillers these days. I showed her my Virago and she said oh God!

She looked briefly at James Patterson and said luckily she got over him years ago. She is moving to Penrith but will return to SA if she ever gets ill. But then she remembered that she is ill, her liver….but she thought she will give old Penrith a go anyway. And then come back. I insisted she might like the Virago modern classics but she said she gave up reading shit like that years ago. I said, as I always say to her, don’t go and she answers as usual: you’ll get over it.

Robert also came in and talked to me about the Pythagorean comma. I asked him what he does when he comes across a disturbing book. He said that he would read it.

I was asked for all of the war biographies by Spike Milligan. John said that he had them all once and his best mate borrowed them and refused to return them. And just as he was about to go to court over them, his mate died. The books disappeared of course…which is typical of that family…

I was asked for The Mining History of the Klondike.

I was asked how to change the region on a DVD.

I read some more of Djuna Barnes while a lady in amongst the children’s books laughed and laughed because her granddaughter is so incredible. The grandchild, who is tiny, urged her grandparent through the door but stood in the way of pram so that nobody could move. The grandmother laughed and laughed again and said: isn’t she a trick? The child walked up the street, walking backwards next to the pram and reading as she went.

Sydney told me about some people he knew on Westwater Road.

I was asked for Michelle De Kretser’s Questions of Travel. The man read to me the first line of the book.

When Laura was two, the twins decided to kill her.

He said: isn’t that a disturbing first line…

I said that I had never read it and he told me I ought to as it is brilliant and has won important literary awards. He said that the author is Australian and the book is unsettling.

I think about this book Questions of Travel…

A lady spends a long time looking at two little carved owls that sit on top of a neat stack of books and the books are all red. There is a copy of Pride and Prejudice bound in ruby leather in there, it glows but she only has eyes for the owls…she bends forward to examine the owls more closely, she is enchanted by the little owls. Her husband calls her to look at a Complete Shakespeare but she will not answer him.

Last night I read a history essay in a journal called Westerly, about which I know nothing except that it is published in Western Australia. The Flinders University library has these bound and shelved in endless heavy rows and I have borrowed two of them because I liked the way that they are heavy. And that is the only reason I brought two volumes home.  And in one of them is a history essay and it is called: Restriction and Control of Aborigines in Western Australia during World War Two by Brian Willis and it is about our history of the treatment of the Indigenous Nations of WA during the Second World War. And about this I have known nothing my whole life and about this I am left limp with horror.

At the end of the day Robert dropped in again to tell me that Medicare is plotting to destroy him but he will not let them succeed. I said: Robert you must keep reading. He said triumphantly that he will keep reading as soon as he sorts out his glaucoma test.

Then I told him about the essay I had read: Restriction and Control of Aborigines in Western Australia during World War Two and that I was left limp with horror. And he said: good, you should be.