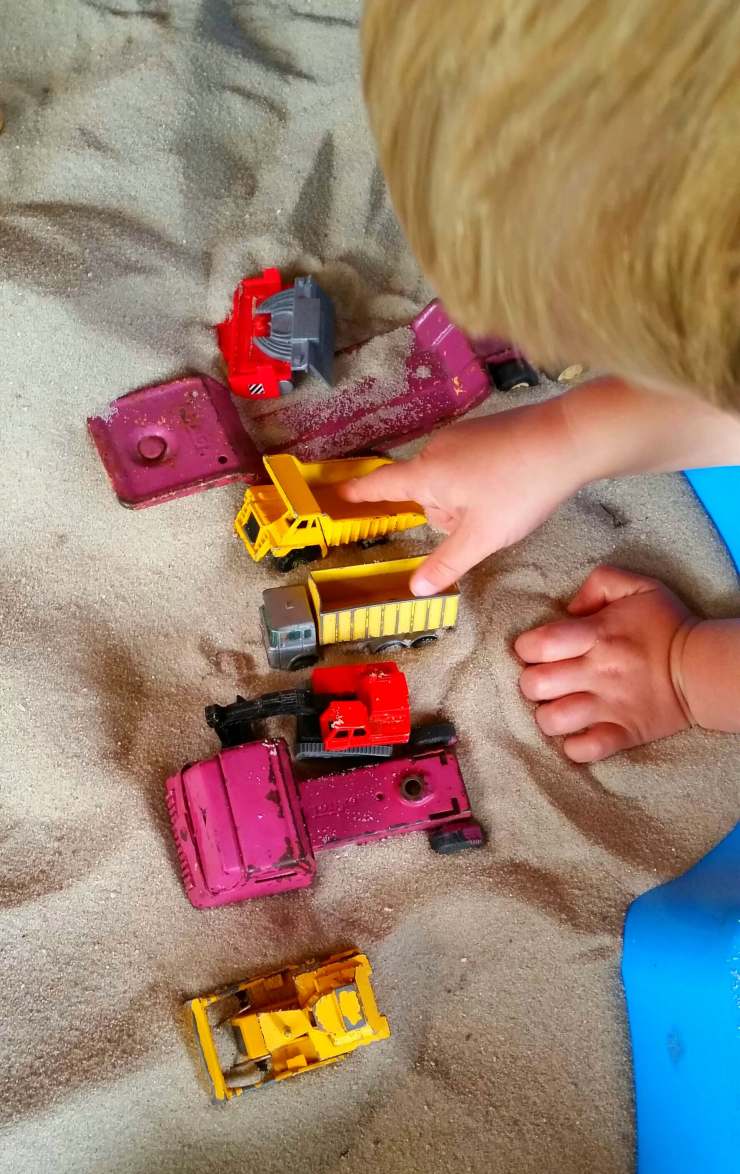 There’s a dump truck, a trailer, a digger, a dozer, and a roller. Each toy has a precise story, a precise history, and a name.

The stories are lengthy and I don’t hear all of them. But they are complex and detailed and make me realise how much I don’t know about what a two year old is thinking.

The dump truck has to bake biscuits, with sugar. There’s not enough sugar. The trailer is making carrots. The trollers are friends. The bulldozer has been removed from the sandpit along with a feather because they aren’t allowed to be in it.

Max talks into an orange tile and arranges for petrol from Foodland. He clicks a long code of instructions and says “cheese”. He says, “Look at this”, and shows the tile to each of the trucks.

The dump truck is sent to kindy.

A bigger truck with a crane and hook is introduced. This is for bringing in the “fish tank” and is driven by a purple and orange felt doll who has leaves (for wings) and who lives in the tyre shop. The truck also carries bowls of food and trees.

At lunch time, over enormous ham and cheese sandwiches, Max shows me how to mend a broken sandwich and how watermelon is really cold. He says that our cat is always watching us.

Max and Noah took a picture, but the camera wouldn’t work. They took seventeen photos because it is impossible to lift a thumb off the camera icon once it is down.

Usually there is another thumb over the camera lens. All they capture is thumb. Still they admire it, ‘Look at this.’

They can’t get their own heads in the frame both at once. When they manage it, they take seventeen photos of thumb. Then they examine each one as if choosing a prize family portrait. And they found one!

Find equipment. Divide and separate. Even though there is a good wide acre, every swing will shave a cousin’s ear, which neither will notice. Place hands up, hands down, hands anywhere, and aim delicately.

Ignore parental advice. The white ball is everything. Muscles, feet, dinner and yesterday, all blur.

Noah can imitate a professional stance quite well. They both like the grass. The ball, when hit successfully, makes a rich white click and causes them to stop still and swallow. 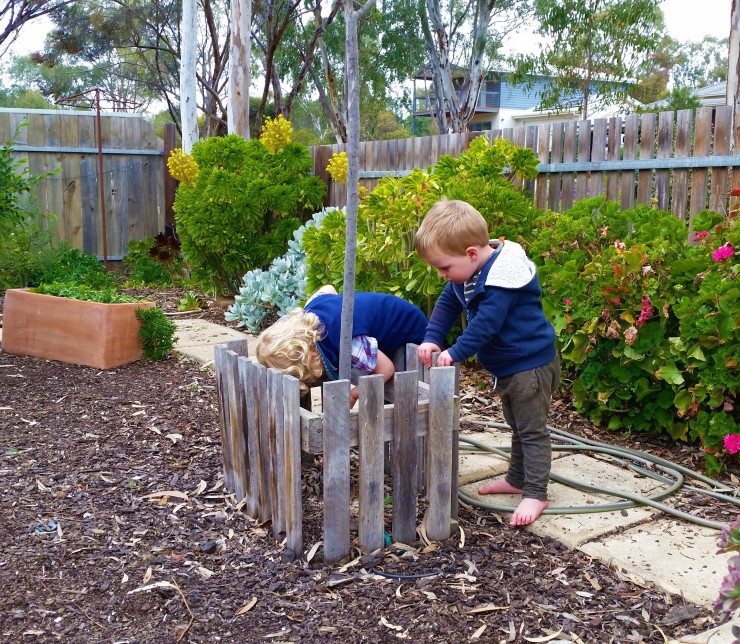 Max and Noah are getting on with things. They have their own version of work. It is very intense. Today, the trees need petrol to keep going.

There is a pipe buried at the base of the tree. They place a piece of bark over its lovely mouth and stare at it.

They squat, and stare at the piece of bark and the pipe, more thoughtfully.

Suddenly they rise up and go for the hose, drag it, grunting, panting. It is too long; it’s heavy and it knots its stomach and argues with their small feet. But they yank and wrestle it into place, refusing to give up.

Then they place the nozzle into the pipe and it fits. It is not a tree. It is a train.

And the water cooperates, a beautiful cold flood that darkens the ground and makes them briefly examine their feet. They check the bower, check the nozzle, check the fuel, crouch and stare, absorbed in the small heaving fountain. Noah taps the tree on its spindly shin. He says, ‘Done.’

Max agrees, ‘Turn off.’ But they can’t. The work is too important. They can’t leave it, the tap is too far away.  They remain with the train, stroking its hot roaring flank, loyal and possessive…

Scraping softly across the top of the soil, they found it. The worm. They gazed down at it in astonishment.

They shuffled and dug and lost the worm. Great Grandma came out.

She said, Is there? That’s good.

They dug and pushed and piled things up. They breathed in garden, worm and disappointment.

Great Grandma went past the other way.

She said, Oh well, there’ll be another.

They watched her go up the path and along the veranda.

They squatted down and inspected the soil. They put their noses down to the surface (just in case). Noah laid his head flat to the ground, ready for any possibility.

Three children are passing outside, it’s the end of the afternoon, school is done. My door is slightly ajar because at the moment, it won’t shut properly. One child makes a graceful leap at one of the spinning balloons and knocks it to the ground. And stands aghast.

I look down quickly, not at a book, but at an electricity bill. Hopefully they will stay a little longer. But they are anxious to be gone. One child has put the balloon back very gently,  upside down.

The all regard it seriously. He explains: I can’t reach it. They nod because it’ll do.

They all turn in a single movement and leap in various angles down the street, lightly, like grasshoppers, scratching gently at the surface of life. I can still hear them, one is telling the others not to touch the posts because he once put chewing gum there.

Noah and Max are here for lunch. And now they have their own table. Away from authority. They have the table that holds shells, stones and sand, seemingly underwater.

I saw them pause and look down into it, into the bits and pieces, roundies and pretties and apparently, snakes!

I asked, but where are the snakes?

There’s a tiny glass bottle, bent in a curve. As though it turned to peer at something and was caught in the furnace of its own curiosity. It melted in a curve like a fried banana, the colour of burnt sugar, yellow lights still winking through it.

Just cool polished agates, malachite chunks like sugarless jubes, a slab of rock layered with such precision that the praline, sandstone and bitter caramel ribbons seem preserved, a slice of glass, a piece of something to be chosen and placed in a paper bag.

The boys, pausing, holding their bowls of food, run their infant eyes over all of these ideas and thought…. what?

What data from this trading table of family and geological history downloaded itself into their galloping infant minds? We won’t know. They have found that they can roar and spit cake at each other. An unalloyed joy.

The starfish, the pieces of amber and the green light of malachite sink to a deeper level. They’ll return to it.

The jumping pillow is where all the kids in the camping park go to jump. They park their bikes there and hang up helmets, shoes and adult advice. And the parents stand watching and looking and remembering. The kids are like thistles or bits of foam or something, weightless, agile, arms and legs all over the place and always six feet in the air without even trying. When they land they bounce again, at least as high as the moon. When one kid bumps another kid they always say “sorry.”

Gravity  lets them stay on their toes. Adults who try it out, however, thud heavily downwards and then head off disappointed for another beer and a new hip.

One kid ran from one end to the other in big moon strides. He was about 8 and master of gravity. He ran into Noah and Max, my grandsons, and said, sorry, with an encouraging face. This is because my grandsons are only two and even a tiny blow to that jumping pillow will refer them sideways, backwards or skywards. Their heads and necks bend like reeds and their hearts go with their bones. It is as though being only two means that the moving surface of anything will still send you in the richest and most rewarding direction.

The neighbour’s kids up our road have made a street stall, a real market stall and they have invited us to come across to examine the goods, perhaps even make a purchase. It is a hot day, the street is silent except for the usual galahs, peering down across the stall, nosy and rude, black eyes on the lip balms (only one dollar each) in a criticising parroty kind of way.
They have arranged and re arranged the tables, written out prices and labels, created a display, argued over stock, placed a till, made a cash float, agreed on bargains. We buy a lemon, $1 each or 3 for $10. When we have made the purchase, we are handed a Free Lemon and so the exchange is a win for everyone. Later we return to purchase two red matchbox cars and a stone that has been painted (with nail polish) with mysterious symbols and could possibly be of extreme value.
Then we all go slowly home, leaving them to the afternoon rush, to continue adding goods and commodities, to discuss supply, demand and marketing strategies. The day continues warm, the sunlight drops kindly over the enterprise, the air is full of golden summer dust and brilliant, joyful ideas.

There is a family gathering at the end of summer. The oldest of this bowlful, the great grandparents, look benignly down across everyone. The youngest on the playground, the two year olds,  look up in astonishment at everyone.
Noah and Max aim their cousinly flights through two things only. Matchbox cars and slices of bun. There is a tiny digger of monumental value. This is because it is a digger, a tiny yellow plastic digger that they both want. The digger. They can both say digger. This word, for Max and Noah, lives in the cave of their mouths, already there, a solid, tasteful item. Digger. And there is the added delicious conflict that there is only one toy and two of them. This conflict provides enough material to enrich the entire afternoon.
They zone from table to garden and back again. They have stolen a thousand pieces of doughnut and bun. Great Grandma encourages the thefts, she looks on with approval. They are able to carry an entire theft in one fist. Mashed in with the cakes are the digger, the bulldozer and the cement mixer. The cement mixer is full of doughnut.
They have found a patch of garden that contains loose dirt; wealth equal to gold, diamonds or cordial.
Here they sit serving their own version of refreshment by the fistfuls until suddenly they both stare at the digger. There is a lurch and a chase, but they are only two years old and the purpose of the conflict becomes lost in the joy of muscle, movement and a snail.
(Reminders of toilet, safety and manners flick at their ankles and are ignored, lost).
There is another chase that ends suddenly because nobody has the digger now, it is lost. They stand perplexed. Suddenly they forget the toy and there is yet another race, wobbly, wild and scribbling, but the nappies weigh heavily, ballast is out of balance and there is a fall. There is exhaustion and despair and then finally, tears. It is time to go home.