A lady cycling past the door this morning slowed to get a better view of the cat in my window. But she slowed down too much, wobbled, and fell against the door with a shout. Everyone was startled, especially me. But she righted and kept on.

An old lady browsing in the front room said, ‘Golly.’

Kerry came for thrillers: anything he hasn’t read yet and bought two that he has read.

I did some good solid shelving. Put everything in the correct order and neatly because Callie is coming tomorrow. Rearranged the windows, and a lady walking past said into a phone, ‘There’s a cute old place here selling books you’d like’.

Dictionary Chris rang for Sophie Morgan books. Alan came in and said someone was break dancing and fell out of their gopher near his house, and they had to call the ambulance. Then he went over to Woolies to get gravy.

Removed another spider from the front room. Two tradesmen went past with about 10 paper bags of bakery food each. Now I’m hungry.

A teenager bought a Complete Shakespeare, a Complete Sherlock Holmes, and a Beatrix Potter Treasury.  She said (with relish) that her room at home is a library.

I sold out of Morgan Taubert’s My Goblin Therapist. Must message for more. A lady put her head in the door and said the balloons are pretty.

Redid the front shelves so they look refreshed and popping. Sarah came in and said she used to have an orange van and that we shouldn’t listen to the ABC. She said Tales From Wandin Valley is one of the best books she’s ever read. We looked it up online and found a copy on Ebay for 7 British pounds. She said she knew it was going up in value.

Ordered two Francis Spufford books and 3 Christopher Fowler books. Looked online for a copy of People of The Book for myself but then found one in my own shop. Lucky.

Deb got her gopher stuck in my doorway doing a three point turn. She was telling a friend about a hip operation and not really hurrying. So nobody could get in or out.

Sarah, returning from Woolies just then, couldn’t get through, and said (loudly) there were too many people standing about and the bakery needed to sweep up all the mandarin peel. Everyone pretty much dispersed then.

I cleaned windows and stacked shelves quietly for the rest of the day, and when I was packing up, someone asked me if I wanted a small dog, which I didn’t, so they took it back across the road again.

“I thought I’d begin by reading a poem by Shakespeare, but then I thought, why should I? He never reads any of mine.”

It was busy today. I don’t know why, just a usual Friday with ducks on the road. I had to dust all the shelves. There was a tiny nest in a hollow in the dust where I usually park. In it were two small hopeful blue eggs. I parked carefully so not to disturb. Over the road people are slewed about on the lawns with cans of coke and paper bags.

A mother came in with her two children. An older boy in sunglasses and earphones. A younger girl in a blue sweater. They bought a stack, and one choice was a leather bound volume, The Complete Shakespeare in black, gold, and toffee. Heavy. Gold edges. I said, ‘Who gets this one?’, and the child answered, ‘Me’, as if I should have known.

I sat back stricken with envy. 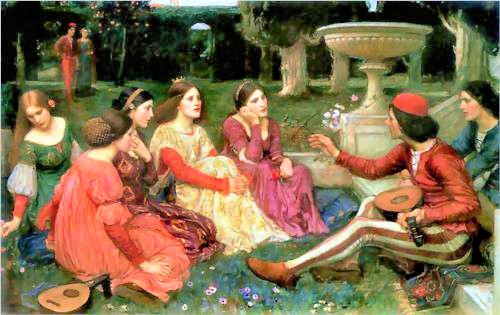 Sometimes people come into the shop and I don’t notice. They just appear, and not through any door that I have. When I look up, there they are. A knot of teenagers, seated on the ground, leaning back, solemn, as though here for a meeting. I can hear the trailing ends of one idea after another.

‘Yeah, but that exerts…’

Someone is reading aloud. Everybody listens. The reader stands up. Finishes. Everyone dives forward with an idea….’I’ve got that on Instagram…not the book…it’s on something…’

‘There’s this really long word in this play…’

More reading out loud.  An argument. A selfie is taken.

‘So what books are you grabbing hon…?’

It was Shakespeare’s Love’s Labour’s Lost they were reading from, and that they are now buying.

Then they leave, one girl hugging the ‘beautiful book’ and telling the others she can’t go out tonight because she has rehearsal.

A Tale from The Decameron, 1916, John William Waterhouse 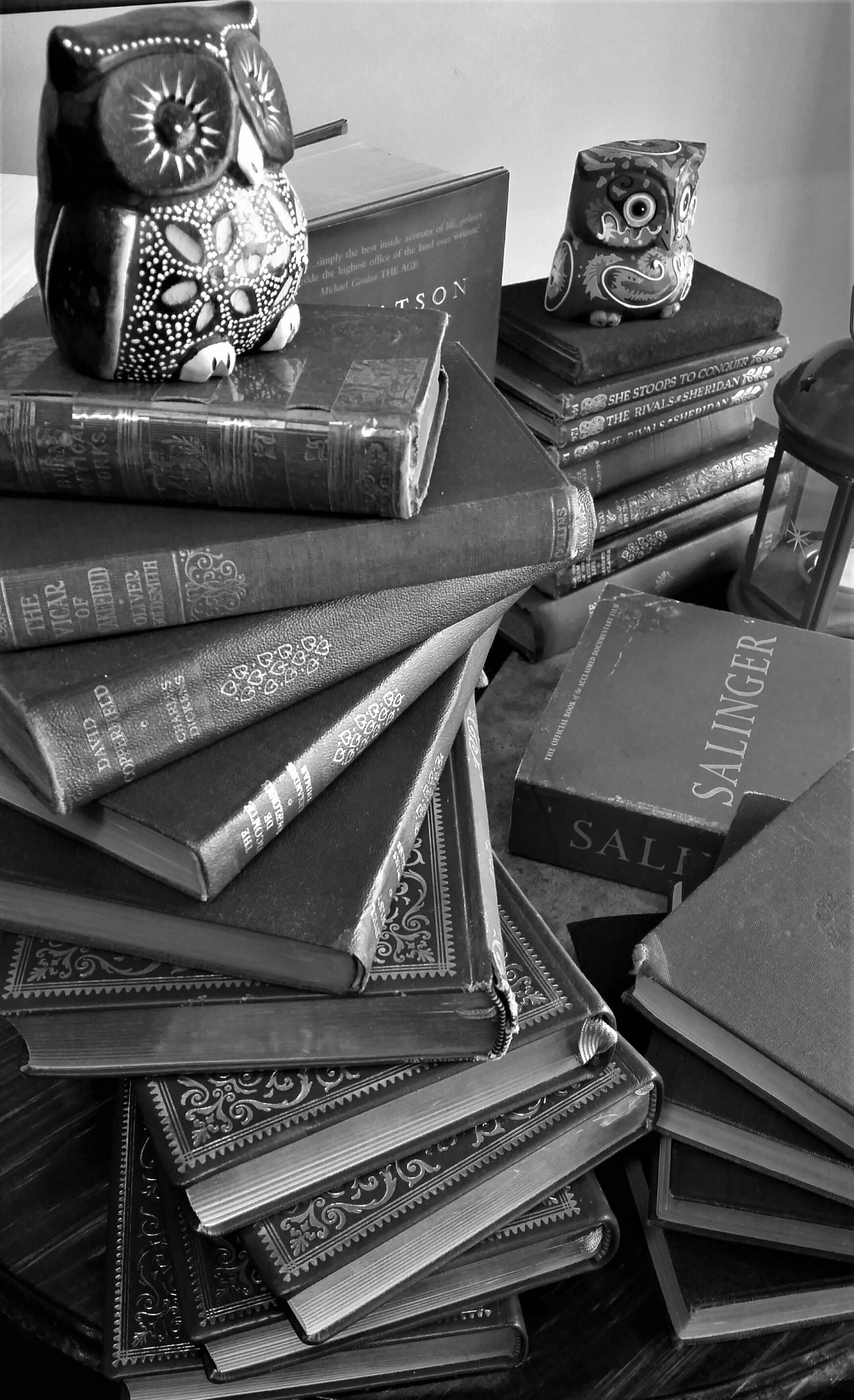 Saw it the other night.

There are high school students here, walking about the shop. They always move so slowly, lean against the shelves to discuss something else. They examine books seriously, stroke the spines, put them carefully back.

I love that one.

These girls tip their heads back to listen better.

Omg, what is it? My mum knows this music.

I know what it is. They played that at sports day.

They were holding onto a Complete Shakespeare. Amazed at the size of it. They stare down at the cover. One girl swings the book gently, exaggerating the weight. She places it back and looks at it sitting there.

He wrote all this. I love this book. My mum will kill me if I get this. It’s like, what about your bedroom, like, all the time.

I know. It’s Sound of Music. I think, this music. I got a crate for mine.

Do you want to read this?

So do I. Did you read Witches?

Omg, so do I. I’m getting this next time.

I love this owl.

Then they leave. As they pass me, they say, thank you, thanks, thanks….and then they are outside and gone, floating away in the cold wind. 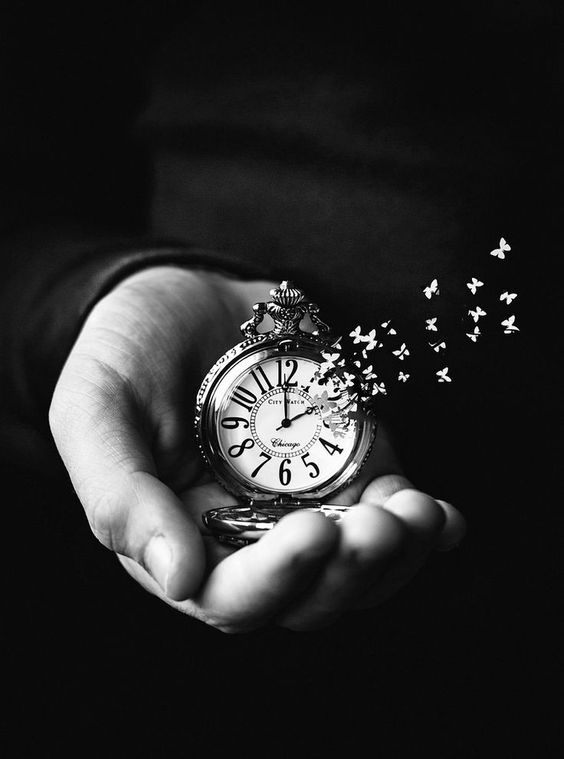 Louis walks slowly but reads fast. He has parked some way down the street and later, I help him with the books, pack the shining bundles into the back seat with the old suitcase and the eggs. He says, thanks very much, indeed, yes, for the winter reading. I love winter, it’s for reading. I’ll get that Shakespeare out you know, it’s been put to the back again.

As though his library was alive and doing things behind his back. Which they do.

When he arrived, he had stopped at the counter and breathed deeply a few times. He always does this, he says it’s to get in the stride of things. Of reading, which is active, chaotic and shattering, especially if you read like Louis.

He says I talk too fast. When I said, here are the Primo Levis you wanted, he says, wait, which ones are they? I’ll tell you why I wanted these. He tells me a story of reading and love.

When I say, here is the Botton book you wanted (about Proust), he says, oh yes, now I need Proust of course. Wait, tell me more about Botton, is he Swiss or French? He sounds French. But I heard he is British. I heard he is amazing. Remind me.

He also reminds me not to talk too fast.

He wants to read about Gandhi. He wants the best biography there is. He says that biographers are artists, artists of the world, artist of us, we MUST consider them. He lists  all the biographies of Mahatma Gandhi he has already read. It sounds like all of them to me. But it isn’t. It isn’t enough: there is another. He holds out his hands, making a cradle that rocks gently, perfection.

I agree, I will find it. He says, there is always time.

Then, finally, he turns to go, but only after an interview that detailed Karen Armstrong, Elaine Pagels, (The Gnostic Gospels), A History of Water, who wrote that? Who wrote The History of Insanity? I saw it somewhere. Tell me about Barchester Towers, I saw it as a series, had the guy from Harry Potter in it, brilliant. Is it a series? I tell him it is, thousands of pages, a commitment, and Louis straightens up, tall with joy.

He will go home, lit with passion, for reading, for history, the earth, mistakes, insanity, water, salt and sand, Gandhi, why and when, how. 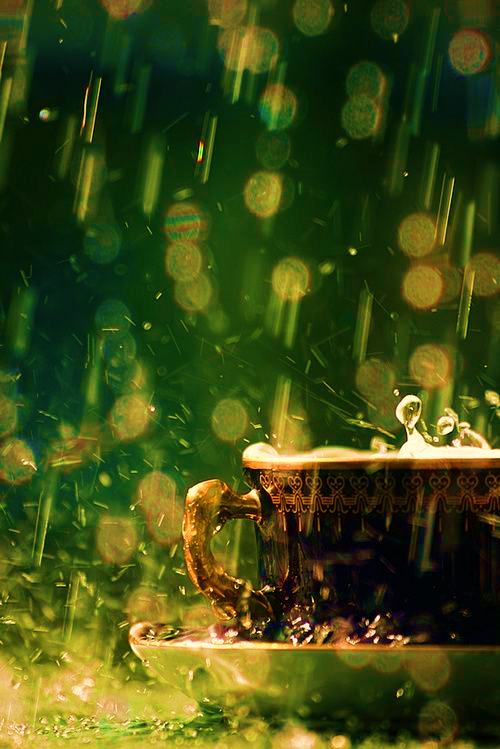 Warm and quiet and raining here. A child, here with her parents looks at the sheep on the front of a nativity story book and says “lizard”.
There is a Christmas tree in a trailer parked right outside the shop and the little tree is held under yellow straps and is glistening with rain. Next to it is a box of tools and a grey water bottle and some metal bars wrapped in a striped towel.
A child presses her nose against the window and stares fiercely at the wooden cat.
A mother, passing by with her family, tells her two small sons that they don’t need books. The smallest boy sets his bottle of coke carefully on the edge of the kerb while waiting to cross safely. He holds on to the trailer with the Christmas tree and when he looks over at the tree he laughs. He says there is rain on the tree eyelashes. When they can finally walk, he forgets his drink and leaves it balanced there on the edge of the footpath, with rain on its eyelashes.
A young tradesman leaves his ute engine running while he jogs carefully around to the bakery and an old man, passing with a bottle of milk, taps the window, trying to find the driver. Then he turns and says to the street, “that’s careless!”
Three boys stand at the door and knock before coming in. The smallest one tells me he came here before and now he is back. He is holding a handful of coins – he asks me if I have any fly spray, but I don’t – I tell them where to go and they say love your shop by the way and they all bump out, leaving fine handprints on the door and lifesavers wrappers on the floor.
An old lady has come in for Christmas presents and tells me that when she taught high school, she rebuked any child who had not written in their text books. She said: make it yours, make the play yours, make the ideas yours. Why are you saving that book you silly child? I want to see it written all over, it is your notes the next person will want. She asked to see any copies of Shakes that I had and she bought four of them for her grandchildren, all of them written through with the furious pencil of previous students, and she was delighted. She bought a copy of Denslow’s Night before Christmas even though he had been a drunken old fool. Then she said she was going back to the bakery for a cup of tea, wasn’t the rain lovely, the lovely, lovely rain.

At the end of the day I have made $29 and get for free a lifesavers wrapper, some handprints, eyelashes, carelessness,  the lovely, lovely rain, directions to Shakespeare and a lizard. So an intensely rewarding day.