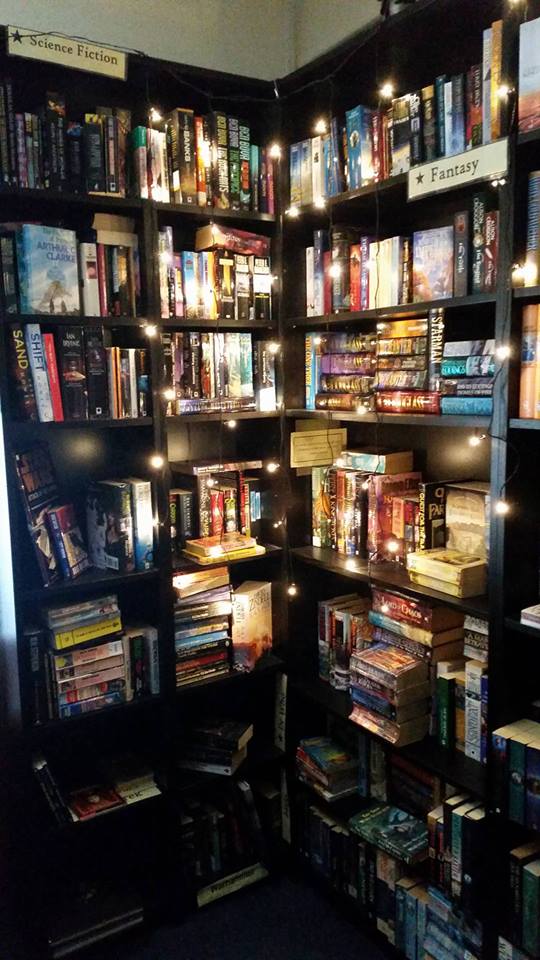 The lady, who had never been in before, just came in to have a small look. But then she found a set of books she had been after for 10 years. She called to her teenage daughter to look at these books, these Louise Cooper books, that she has finally found after 15 years. Her daughter did not look up at them.

She then rang somebody to say she has just found a series of books that she has been looking for – for  exactly 23 years. She lay on the floor in front of the science fiction and read all the titles aloud on the lower shelves. She said to me: mind you I have read this entire shelf. She then told me that she can read at an impressive 1000 words a minute. Her daughter continues to be unimpressed.

She said: mum get up. Her mum said: there’s a good Hobbit here, but her daughter did not reply.

It is raining and nobody much is coming in. Passers-by move slowly, unused to the rain and angry with their umbrellas. One man said to his wife that he’d told her so many times to get a new one and she said: keep moving Frank, the car’s there.

But I am reading Four Frightened People by E. Arnot Robertson, it is a Virago Classic which makes it very good by default and so I am not looking out closely at the rain and the people today. Robert came in excited for his Bhagavad Gita which is coming from India, but it was not here. He was not upset though, as it means he can spend his money on cigarettes today instead.

Glenda bought The Fatal Shore by Robert Hughes; she said she is hoping that this history might include women in it.

Imogen, who is 13, is going to read everything by Chesterton as she loves the Father Brown stories. Bradley came in with his Christmas voucher to buy all of the Skulduggery books; they must be in the same size.

Ricky rang to find a copy of Karl Marx: Greatness and Illusion by Gareth Stedman Jones but I told her it was not being published until May. She said: well that’ll teach me then, won’t it! Outside it is warm and dark and still raining and the galahs are noisy and Ricky says: I can hear those birds over there!

When Harry picked up his art book he says: God, the galahs are ruinous.