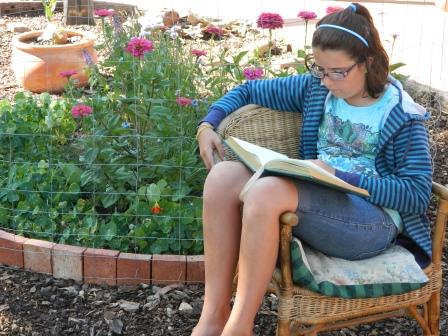 A fisherman from Kingston came in looking for Terry Pratchett and told me that once he bought a Terry Pratchett in Mt Gambier. He said the beach along the Kingston coast is a mess but that is the fault of developers and the council. He said that Terry Pratchett would have said a thing or two about that! Hahaha! I agreed with this and he went out very pleased.

I remember one morning this week, a man was waiting for his small daughter. But she had found The Lightning Bolt by Kate Forsyth and this book is book five of The Chain of Charms series. She was about seven years old, kneeling on the floor to read the book and her father was moving impatiently. His work boot nudged and toppled Animalia and she rebuked him silently with a lifted finger. He stared through the window, rattling keys, obedient. Suddenly she stood and showed him the cover; she was radiant and suddenly, so was he.

A man said that his hallway was lined with bookshelves and it was the length of a cricket pitch. His wife said she did not think it was this long.

I have finished with the Edith Wharton and I read the best stories in this book twice over so as not to miss anything. I am not reading anything else, not yet, because the story Mrs Manstey’s View will not let anything else in.

I was asked for Batavia by Peter Fitzsimons and Secret Servant: The Life of Sir Stewart Menzies by Anthony Cave Brown. This reader told me that Nagal’s Journal, which he found here last time, is the best thing he has ever read. He said that the diaries on the ships, as kept by the captains are the best reading there is. He squared his shoulders and stood back to see if I might disagree.

Three teenage girls were talking and talking. One asked for Sherlock Holmes. She hopped up and down when she told me how much she loved Sherlock Holmes. But sadly, I had none. She said: imagine this, imagine Sherlock Holmes in hardback. I really want to find this…Oh my God.

Her friend said: look at this, I am so into this. Oh my gosh guys. What will I do? Oh my God, I am going to have this.

It’s Harry Potter. They all bent over the volume, close together and suddenly speechless. They whisper: it’s a hardback, it’s in another language. Oh my God. They place the volume on the counter and look at me dazed. She says: I collect them. Then they left, leaning on each other, hilarious, rapt.

A tall man in front of me examines the Wordsworth classics and is intense and frowning. His wife is amongst the Art. He leans back; as usual there is nothing for him! He returns to Art but his wife is not finished. She says: I’m not nearly done. She is frowning now too; he moves away and she stops frowning.

One man was intent upon the histories. Then he came away abruptly from the shelf and regarded his son who was texting angrily outside the front door. He said he might come back another time. He closed the door politely but also angrily.

I was told that Dick Francis wrote better books than his son. A lady told me that her fifteen year old grandson loved to read fantasy series but she was going to buy him a biography of a yachtsman instead.

A very tall and smiling man bought Martin Chuzzlewit and said that Charles Dickens had the most extraordinary way with words. He said he was reading them all, he did not like Bleak House but the rest, just marvellous indeed.

I have only read two books by Charles Dickens and they are not easily forgotten. I told him that when Daniel Quilp drowns in The Old Curiosity Shop I was glad! He said: yes indeed!

Two men together were talking about their teenage sons. One man said that his son would not show him how to use the remote for the television because he learns too slowly. His friend said: hahaha.

They asked me for a copy of Watership Down.

I was asked for books on card tricks and a young girl showed me a plaster dragon she had just bought from the goodwill shop. I was asked for the Wind in the Willows.

A man said he had a lot of time for Willa Cather. He asked me had I read her. I said that I planned to but right now I am with Edith Wharton and he said …AHHH…and he looked very happy. He told me that when I get to Willa Cather to read Death Comes for the Archbishop first.

“The ideal reader is the translator, able to dissect the text, peel back the skin, slice down to the marrow, follow each artery and each vein, and then set on its feet a whole new sentient being. The ideal reader is not a taxidermist.”

Notes Towards a Definition of the Ideal Reader by Alberto Manguel