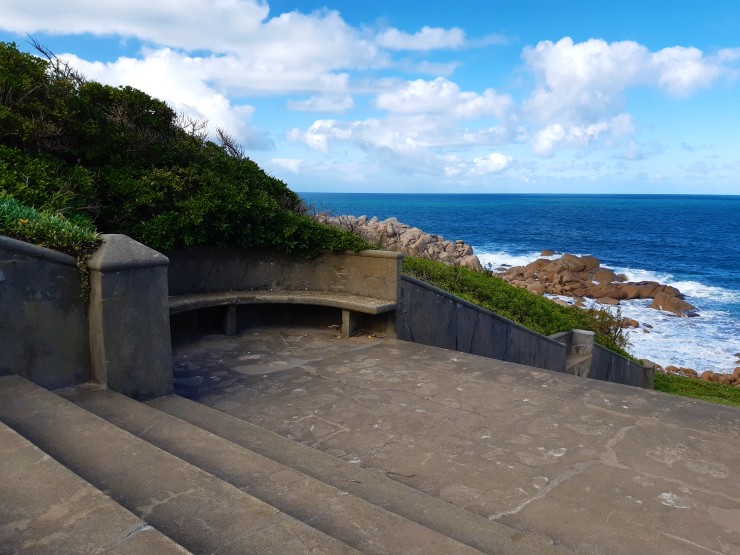 It was cold. The stone seat was cold. Everywhere uninterrupted; just cool spaces without argument. There were signs describing the rules; keep your distance…be respectful. The paths ran just above the beach in both directions; walkers trudged by with a kilometre between each of them, everyone leaning into the wind, wearing good coats and sporty shoes. There are seats along the paths. Someone has tied a bunch of flowers to one. An old couple stand near one seat, hanging onto the back of it while they hold plastic cups and open a thermos. My daughter and I take the sand, and we sink into it awkwardly instead of joyfully because it is not summer. The houses are all silent. I name all the trees wrongly. I note the plants that survive here, the seaside varieties with thick ankles and bright sparky flowers, relaxed in the salt wind. There is rain. Then sunlight, metallic, so that we are suddenly hot.

We pass a tiny bay with a danger sign at the top. This makes us look down to find the danger.  Over the other side, two ladies are also gazing down into it. It’s a tiny bay with nice rocks and stones, and waves coughing in and out of its narrow throat, glassy and cold.

There was an old couple near the toilets. She told him to go and move the car, perhaps bring it closer. Because it was cold. He shuffled off slowly, dressed warmly, his hands hanging down, checking now and then in his pockets for the car keys which were in his hand. While we were at the toilets, he drove back, slowly, slowly, the only car in the whole area. We watched them greet each other again, slowly and unperturbed.